Here are (some of!) the spoils of our holiday visit to the Bay Area — Ratto’s own White Wine Vinegar and California Olive Oil sparkling — sparkling in the Maine winter sun. 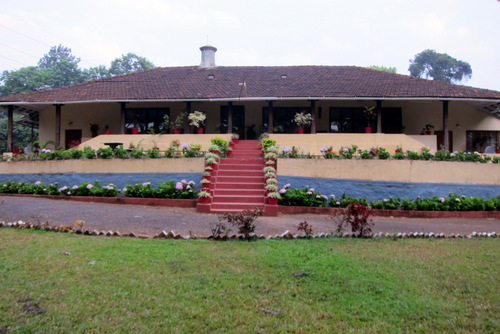 Our last “foodie” stop on our trip was in another mountain area, north west of Coonoor and back in Karnataka state but right on the Kerela border, referred to as “Coorg” although that seems to be a colonial era term and is not found on any maps. Significantly we would be entering a dense chunk of the Tata Empire as guests of their hospitality division surrounded by tens of thousands of acres of their agricultural division which they proudly announced that they sold most of their coffee production to Starbucks.
END_OF_DOCUMENT_TOKEN_TO_BE_REPLACED

The view from the upper bungalow at Acres Wild Farmstay, Coonoor, Tamil Nadu

Our journey after Melkote began with being picked up by a driver and his car as we said our goodbyes to the Kouragi family and thanked them for hosting us. We had arranged through a travel agent that specialized in culinary focused travel to visit a cheese maker, and to visit a coffee plantation before we had to leave India. We had four nights left, and two of them would be spent at Acres Wild, a “22 acre, family-run organic cheesemaking farm and farmstay” according to their website. First we had to get there.
END_OF_DOCUMENT_TOKEN_TO_BE_REPLACED

Sambar in the cup, pepper pickle, mint coconut chutney, and a stir-fry veg main dish surround a Finger Millet cake (Ragi Roti) on my plate at one dinner.

Some of you may know that the title is NOT an invitation to dance (though, feel free…) but to eat a lentil-ish soup/stew that is served throughout the South India areas we visited on our trip. In fact it seems to be a central dish to the local cuisines, served all day in a little (often metal) cup beside your roti (bread) and/or rice, and the main dish (vegetable or meat). I found Sambar SO satisfying that I was often tempted to consume multiple cups of it in one sitting, though the local consumers appeared to treat it as a complement to the main dish and primarily for moistening and flavoring your bites of bread and rice in combination with the main dish.
END_OF_DOCUMENT_TOKEN_TO_BE_REPLACED

The agriculture was just so different than anything I’ve ever experienced I kept a list of all the food crops I saw being grown, followed by a few crops I did not see being grown but saw offered at the markets.
END_OF_DOCUMENT_TOKEN_TO_BE_REPLACED 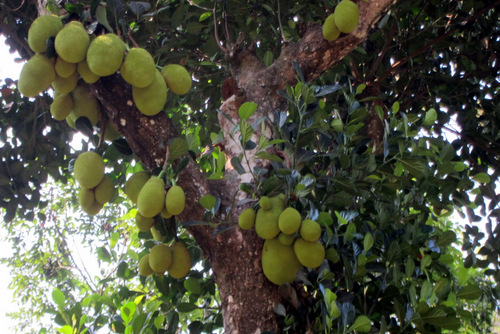 We had seen Jackfruit, the largest tree-grown fruit on Earth, occasionally in asian grocery stores, at asian market stalls, and on Wild And Crazy Food shows on TV, but we had NO IDEA what we would do with it if we ever wanted to eat one, so we had never tried.
END_OF_DOCUMENT_TOKEN_TO_BE_REPLACED

In Maine I wait to break out the grill until Memorial Day. This year it will be home grown brisket cooked low and slow over some applewood with a beer steam. 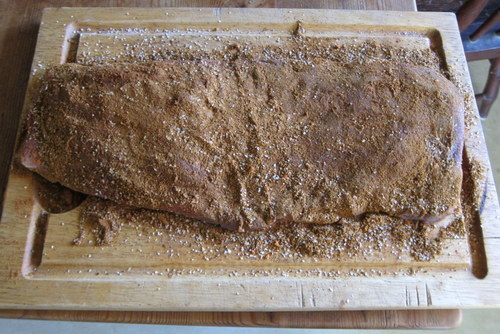 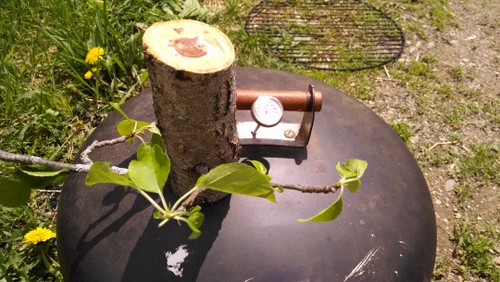 The wirey man in the small room did not sit at a desk, but stood at a small metal stand — perhaps a music stand? – holding paperwork and my and Alison’s passports. He seemed young – smooth faced, long and lean, almost feline – but it’s often difficult for me to estimate age in Han men. He wore an all black uniform along with a black cloth baseball cap that had a short brim and Chinese characters stitched into the front.

“What is your name?”

“Eric Rector?” I replied as a question, obviously nervous.

“What is the purpose of your visit?” He had not yet looked at me, and continued working through the paperwork on his stand whether I replied or not. Perhaps he was filling in the blanks of a Rural Village Visa application, I wasn’t sure.

“I am touring Turpan for pleasure.” I said using the terms available in the list of options on the imagined visa form.

He laughed, which did not make sense because I’m sure he wasn’t reading any irony into this situation. My host family had tried to register our visit to their home with the village police, and the local police wanted nothing to do with us. They insisted that my hosts call the city police and follow their lead. In the village station my host called and was told: bring them to the city headquarters – we want to talk to the visitors. We also want them to check into a hotel in the city; there are not adequate facilities for them in your village.

“What is the purpose of your visit to _____ Village?” he clarified.
END_OF_DOCUMENT_TOKEN_TO_BE_REPLACED

After an unfortunate (for all involved) mistake on the part of our Super Funky Hotel for our last night in Beijing, we “landed” at the Four Seasons a few blocks away from the US Embassy in the northeast corner of the inner-ish city (Third Ring Road out of six so far). We are surrounded by other western and western style (Kempinski?) hotels, High Fashion boutiques (Rolex, Tudor, Chopard…) in glossy shopping malls, and large boulevards.

Last night we met up with Michael and his wife (Dee) and co-worker Hao at a real micro-brewery for draft beers, lamb burgers, onion rings, and bbq chicken wings (the day before I was munching on spicy pickled chicken feet in a Chengdu market). The crowd was WAY expat with a sprinkling of hip locals, and the talk was about today’s China and how we each related to it.

When we got back to our 23rd Floor room at the ‘Seasons, I said to Alison, “it’s too bad that we aren’t going to be able to experience the ‘real’ Beijing on our last day.” And then, looking out the window at all the office towers, apartment towers, flashing advertising, and bumper-to-bumper traffic, I realized I was wrong. This experience — a westerner in the Four Seasons in this commercial and diplomatic district — this WAS a ‘real’ Beijing experience, just as much as exploring the hutongs in the Dongcheng district, visiting the landmarks, biking the streets, eating (and making) dumplings, and climbing the Drum Tower to watch the twisting pigeon flocks orbit their home roofs. We were still in Beijing where nothing and everything was changing.

[Yes, our driver DOES speak a little French…]

Where to begin; at the end of course — at The Dictionary of Flavor restaurant in an upscale pedestrian mall area of Chengdu (where you can buy silk embroideries for THOUSANDS of dollars each) I crossed off almost everything left on the (written!) list of flavors that I wanted to sample:

At one point I might have said that Xinjiang was ‘killing us with kindness’ where as Chengdu appears to be killing me with endless awesome dishes.
END_OF_DOCUMENT_TOKEN_TO_BE_REPLACED