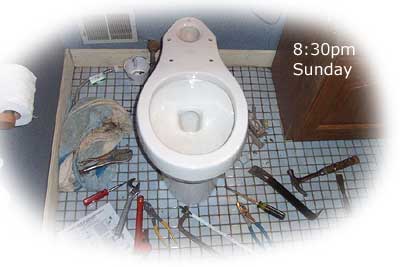 Last summer my friend Michael leveled with us: “You GOTTA get a better toilet…” He would know, because he builds houses for a living. We knew that our main toilet sometimes had trouble “processing batches,” but I thought that might have more to do with the drain pipe plumbing not providing the appropriate amount of action to pull things through. “No,” Michael assured us. “Your toilet sucks. Any modern low-flow model would beat the shit out of yours.” Literally, I suppose.

So we got a list of “good” models from Michael, went shopping, and bought a low-end Kohler to replace our faulty American Standard. Alison wanted to get rid of the old toilet seat, but I insisted that we replace it with another wooden seat because it’s much warmer than porcelin or plastic, and in January in Maine that’s a nice thing.

We got everything we needed to make the switch, but the first time I tried to turn off the water valve to the toilet, the valve was frozen, and I was afraid that if I forced it I might break it, so I wanted to wait until I had Alison available in the basement to turn off the main water valve if necessary. That small added detail meant that the new toilet sat iin pieces at the top of our stairs for the next four months, until Alison and I both wrote down “replace toilet” in our calendars for this Sunday — NO EXCUSES.

We got a late start after completing an earlier chore, first getting out our walkie-talkies so I could quickly get her word to shut the valve in the event of that classic homeowner cartoon face spraying situation. I adjusted the pipe wrench on the oval valve handle and slowly applied pressure: it turned, though never easily. After it seemed to ‘stop” in the closed position, I flushed the toilet, and thankfully the tank didn’t refill…

…at which point I discovered a blackened plastic container full of gravel at the bottom of the tank! Was this half-assed attempt to save water (neither Alison nor I remember putting this in the tank) the reason we some times had trouble “processing batches?” Perhaps, but it was not a reason to halt the replacement plan. I alerted Alison to my success, and began the arduous task of dissembling nuts and bolts that had been kept moist but not been touched for at least 15 years.

Fighting accumulated gunk leading to stripped threads took most of the time in this project. I did manage to unscrew all the bolts holding the tank to the base, as well as the water-entry nut, but one of the seat bolts was too rusty to get a grip on (no big deal), and one of the brass nuts on the bolts holding the base to the floor/drain “flange” (a great plumbing project word that appeared repeatedly in the instruction guides, defined in Websters Collegiate as “a rib or rim for strength, for guiding, or for attachement to another object” which may have come from the word “flanch” meaning the edge of a shield), and I had to shear it off with a crow bar. Then the toilet lifted up off the floor, a wonderful aroma wafted up into the bathroom, and I was halfway done.

Thankfully the toilet kit the orange aproned Home Depot flunky told me to get with the toilet included replacement brass flange bolts, so the rest of the installation went a lot easier: apply the new wax seal, set the toilet down onto the open pipe, aligned with the new flange bolts, rock it back and forth to seat the seal, bolt it on, bolt on the tank, bolt on the seat, and attach the new curly water feed hose to the tank.

I turned the stiff valve back on, no water sprayed in my face (hooray!) the tank filled, and we successfully flushed down the few bits of floating styrofoam (which flaked off the styrofoam blocks inserted into the tank to keep the “works” from bouncing around during shipping).

Now that we’ve had a chance to fully test this new “processor” the bottom line is: the shit works. Another homeowner’s triumph!