It was a partly sunny, but cool Sunday afternoon before Labor Day, the Giants win at Cincinnati was over and there was no NFL on the TV, it being the last Sunday before the regular season kicks in.

Bored, I decided to go to Circuit City and look at TVs again. I had been looking at HDTVs at Circuit City and Anderson’s Big Screen TVs on the Peninsula for a couple of months or more. But I hadn”t pulled the trigger. Leslie recently got a 42″ from Circuit City and Paula and John were sporting a smaller wide-screen number, so I was in the mood.

Just inside the door, what should I see but a 40-inch Sony Bravia, on sale, $800 off, 18 months no interest financing. Holy shit! That’s what I want. So I talked to a salesman to confirm what the sign said. “It’s our Labor Day Sale,” he said. I could hardly wait to get back on my scooter and get home to drag Carol to the place, with the spacious SAAB, this time.

The deal got done. There’s the TV along with some frightfully expensive Monster Cables for appropriate HDTV connections. You know Monster Park, where the 49ers play? That’s the Monster Cable people. It turned out there was a rebate for the cables and a rebate for signing up for Comcast HD service right there in the store. So that’s a deal on a deal on a deal. I was dealin” like Tom.

I put the box in the Living Room, but didn”t even open it.

We discussed a new DVD, but decided the current one works fine. On the other hand, we planned to move the LR TV and it’s hulking cabinet to the bedroom, and the bedroom SONY to the kitchen, so a new DVD was in order. Back to Circuit Cityâ€”I”m getting to know Mike, a sales guy there, bad signâ€”where I found a DVD/DVR with HDMI for only slightly more than a straight DVD. That box fit on the back of the scooter. 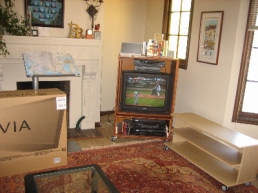 What about a stand for the big mutha? We had been looking in the IKEA and Crate & Barrel Catalogs, and saw a nice stand at the Crate and Barrel downtown. But IKEA is way less expensive and it looked just the right size, and the wood matched the IKEA bookshelf under the bay window. I was off to IKEA. The lower deck of the Bay Bridge (eastbound, no matter what they showed in The Graduate) was closed Labor Day weekend, so I took the Golden Gate and 101 to the Richmond Bridge to the East Bay. Not so far, and there was NO traffic. I used the upper deck of the Bay Bridge back, I”ve never seen it so empty.

We got the stand put together with only a couple of do-overs.

The next step was Comcast. They could come the next Friday and install the HDTV box. Not only that, for $12 installation, they would bring cable to the kitchen, with no additional monthly charge! ESPN and NBC and an unwavering CBS in the kitchen, why didn”t I do that years ago? (The kitchen TV had rabbit ears, the SONY from the bedroom is cable ready.) Saturday and Sunday afternoons and weekday evenings I”m usually in the kitchen, so that may be the greatest move of all.

Now, everything is in its place, but as you can see, some wire management still needs to be done. Carol says we’ll never have to go to another Giant’s game… this picture is so big and clear, you can see the blades of grass and specs of dirt on the plate.

And there are a few boxes to get rid of.