I walked up Carson Street on the Southside looking for a bottle of water, some gum, a bank machine and a bus stop. I found all those things. The street was lined with traffic in both directions. The bus stop was in the sun with no shade and no bus in sight. I asked a woman at the bus stop if I walked up the street, could I find a taxi? “I don”t think so,” she said, she was wearing a Steelers number 78 v-neck tee shirt. I asked her about the bus fare. “$1.75, $2.25 with a transfer.”

Eventually a bus came; it was freezing cold inside. I got off downtown at PPG Plaza, thinking I could get a taxi there. No such luck. I spotted a taxi, parked, with his flashers on. “Are you available?” I asked.

“I”m waiting for someone. You have to call for a taxi, they don”t cruise in Pittsburgh.” He handed me a taxi receipt with a phone number. I started walking toward the Omni Hotel, there would be taxis there. When I got to the corner of Fourth and Wood I stopped in the shade and looked at my map. It’s five more blocks to the Omni. I called the number. “Right away Marcus,” the woman said. I waited in the shade. And waited, fuck this; I started walking to the Warhol. Seven blocks plus the bridge, I”ll flag a taxi if I see one.

The Warhol Bridge and a striking new building I know nothing about.

It wasn”t a bad walk. I stayed in the shade, except for the bridge.

The Andy Warhol Museum was just the right cool in every way; the temperature, the design, the exhibits. The Religious Works of Andy Warhol and Keith Haring occupied the top floor and was the featured show. There were some amazing works by Haring that I had never seen and many photographs of Haring. Much of his work has a pronounced sexual orientation, some a distinct penis orientation. Carol and Sarah caught up with me at the Warhol from their conference. I remarked to Sarah that Haring was quite well hung.

I had seen most of the Warhol works at various museums, or pictures of them in books, but to see them together, in full size and in real life, was a treat. And there were many works on display that I hadn”t seen. Where else would one see a room with Cow Wallpaper? I had just the right amount of time, an hour and twenty minutes, until they closed at five o”clock.

Photographs were allowed in the museum, and we were free to take photos of any of Andy Warhol’s work. Works of others were off limits.

My camera was hand-held, most of the rooms were dimly lit, and for the most part I did not use a flash. The quality of these photos is not the best, but I find the subject matter awesome, so I wanted to share. 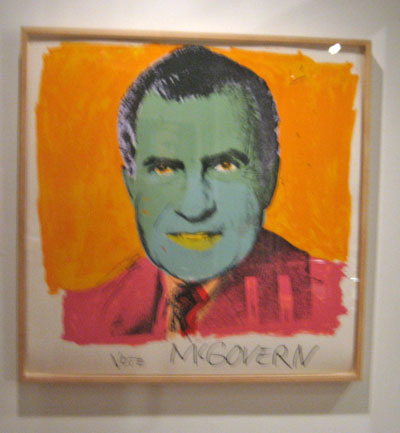 and then after Watergate:

Don’t blame me, I’m from Massachusetts 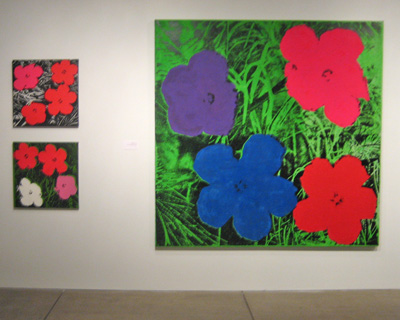 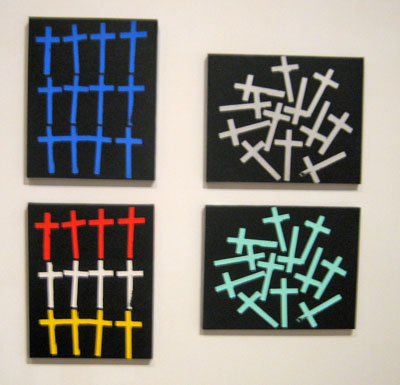 I am walking through a cloud of pillows.

One thought on “Andy Warhol Museum”