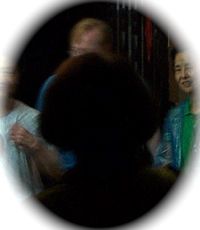 Many of you have asked us: who is this Mrs. X and why is she her name and image obscured?

It’s actually less romantic than many of you have speculated: we felt as though we should protect her privacy on the Internet while at the same time telling her fascinating story. Although for all we know she has blogged it all under her real name at MrsXsite.com…we, however, didn’t feel it would be appropriate for us to do that, especially without asking her permission, and by the time we decided to blog about this experience, she was on a plane back to the States.

Several have also asked “how did a family of Russian Jews come to live and work in Shanghai?” It turns out that there is a terrifically interesting answer. Harbin, China (in the far north-east of the country, kind of like Maine) became a way station for Russian Jews after the pogroms of 1905 incited by the infamous October Manifesto, as well as for White Russians after the Communist take-over of 1917. In the 1930s, more Jews came to Harbin fleeing the Nazi movement in Germany, but that’s beyond Mrs. X’s family. Her father arrived in Harbin in 1905 with his family. When he grew up and began to get into business, he learned that Shanghai (as an international city controlled by the joint interests of Great Britain, the US, the French, and other trading countries) would allow people without passports (as his family was after fleeing Russia and landing in China as a refugee) to live and work, so he moved there and became a very successful business man. There he met his wife, and 10 months after being married, Mrs. X was born.

According to Mrs. X, her future in North America was due to a “little twist of fate.” The family fled Shanghai for Hong Kong, which remained in British hands after the Communist takeover, but there they were not allowed to stay and thus had to find another country who would take them. They spoke Russian and Mandarin, and they knew that the USSR and the PRC were two places they would definitely not be able to live. They applied to refugee programs around the world, and one day when visiting the Canadian consulate in Hong Kong her father struck up a conversation with one of the Mounties. The Mountie came from Alberta, and the father asked if he knew of the restaurant one of his uncle’s owned and ran in Alberta, Canada. The Mountie knew the restaurant very well, and even knew his uncle. The next day the family was informed that their application for immigration to Canada had been accepted. They settled for a few years in Alberta, where Mrs. X learned flawless English, and then eventually moved to Montreal where she went to high school and college.

But the device of ‘Mrs. X’ lends itself to a whole new meaning: she could be anyone. She could be your neighbor, should could be your dentist, and/or she could be the person sitting next to you in the airplane exchanging pleasantries with you about pets and grandchildren, but who was born in Shanghai, fled the Communist takeover, and then grew up in North America just like you and me.

And did anyone notice that one of the winners of the 2009 Nobel Prize for Physics, Charles Kao, was also born in Shanghai, and also fled the city in front of the Communists in the late 1940’s? Maybe not, but my ears perked up when I heard the “born in Shanghai, educated in England…” when NPR announced the news. He was 15 when he left; it’s possible he and Mrs. X knew each other. Furthermore, after she was married she lived for ten years in the town where I grew up. I’m sure my parents could have stood behind her in line at the Walnut Food Mart, at Woolworth’s, or at the Cinema, or sat on a blanket next to her family’s blanket the big Fourth of July concert and fireworks display. After that she moved to the mid-west where her husband taught at a very large state university, and where she raised her own children and participated in a suburban life much like millions of us have. How many people did she “know” who did not know her exotic past? And likewise, how many of us “know” people and yet have no idea the true circumstances of their past?