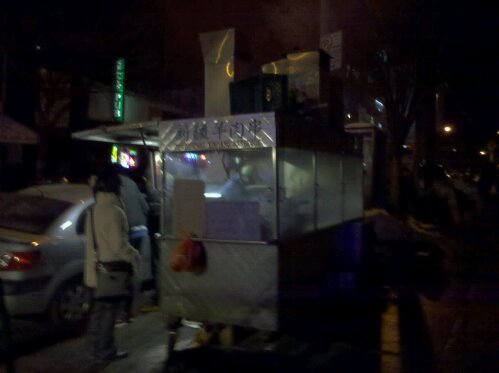 I found one of the the elusive Flushing (Queens, NY) Xinjiang Bbq Meat Carts! Two lamb,  one beef, $3, and very good.

I have heard lots of stuff from adventurous NYers about the food in Flushing, including these street vendors selling “Authentic Xinjian BBQ” or what we normally think of as kebabs. So now that I’m back in NYC for a few days of bidnes, I went out to check it out.

And they are probably kebabs in the cultural sense, a cooking technique made popular in the Near East (specifically Turkey where the word comes from Arabic, Urdu, Turkish, etc.), but probably has roots in the grand Silk Road caravans where the easiest way to eat fresh meat when you’re “on the road” was to put it on a stick and then hold it over the fire. Obviously this has been refined into the meat (and other things) on a skewer/stick that we’re familar with.

However, Xinjiang — which is the largest province in China, bigger than Texas, Louisiana, Arkansas, and Oklahoma combined — is mainly populated by Uigurs (pronounced Wee-gers) who are Turkic speaking people more closely related to the Kazaks, Uzbeks, Afganis, and Pakistanis that surround them than they are the Han people of eastern China, and their cuisine reflects that affinity. It is lamb based (most of Chinese cooking is pork based), and they make kebabs, rice dishes, lamb and noodles, samosa-like dumplings called “samsa” all eaten with “naan” flat bread baked in tandoor ovens.

The Xinjiang kebabs we were exposed to were all cooked on long metal skewers, and the meat was sliced in long thin strips that were threaded on the skewers into folded ribbons, then the skewers with the meat were dunked into a yogurt-y marinade for some amount of time. When you wanted to cook one you pulled it out of the marinade, and put the skewer over a wood fire with the ends supported above the fire. As the meat cooked it was turned and a dry spice was sprinkled over the cooking meat. When it was done you ate it right off the skewer. And it was good.

This Flushing, NY version wasn’t *exactly* the same, but in some ways it was. The meat was in little chunks (probably 1cm cubes) threaded onto bamboo skewers (disposable). It was marinated. It was cooked over a charcol fire. Dry spices were sprinkled onto it while it cooked. And it was good — very tender, very flavorful, with the full essence of grilled/burnt meat. I will try to go back soon.