A wise man once said, “You”re never as old as you”re going to get”. And you only hit the big five-oh once. On December 8th it was Kelly’s turn. Thinking of fifty as the “new forty” she told me several months ago that she wanted to celebrate this milestone with a big party, bringing as many of her close friends together as possible, and to “partay” like its,well, you know. A tall order, but one I felt I was equipped to manage. Luckily, 12/8 was on a Friday, so I could plan a party without compromise to available time and ‘school nites”. Her sorority sisters from Philly and Walnut Creek were available, and agreed to fly out for the weekend, joining other close friends and relatives from the general area. The Midtown ATL restaurant South City Kitchen, an Ã¼ber-hip place we had visited before was selected from my ‘short list”, primarily because their semi-private upstairs loft is a MUCH nicer way to get together than being shuttled into a dark, private, closed-off room in the bowels of a restaurant. Sitting above the bar, it looked out over the restaurant so we could be part of the atmosphere, instead of being controlled by it. I quickly booked it and the plans started to take shape. As the date approached, Kelly’s brother Brad called me and suggested that ‘since there are several DUI’s in the family” it might be a good idea to get a van or limo for group transportation, with a reliable DD. MIGHT BE??? Why, it was BRILLIANT! DONE!

In the end, twenty (or so) of her friends and family helped Kelly celebrate her mid-century mark with food, drink, fun, drink, frivolity, drink, and cocktails. A wonderful time was had by all!

In addition to the party, a Voice Quilt was also established, allowing over 35 important people in her life so far were able to leave a “voice message”, later assembled into a “quilt” on a flash-drive inserted inside a memory box. Initially, I thought it was schmaltzy, but it turned out to be a spectacular hit. Tears flowed, and blubbering ensued when I gave it to her on the morning of her birthday. (I am confident I accrued some points with that one.) Thanks to all of you who participated. (If you want to hear the voice quilt, go to listen to them online at this link.) 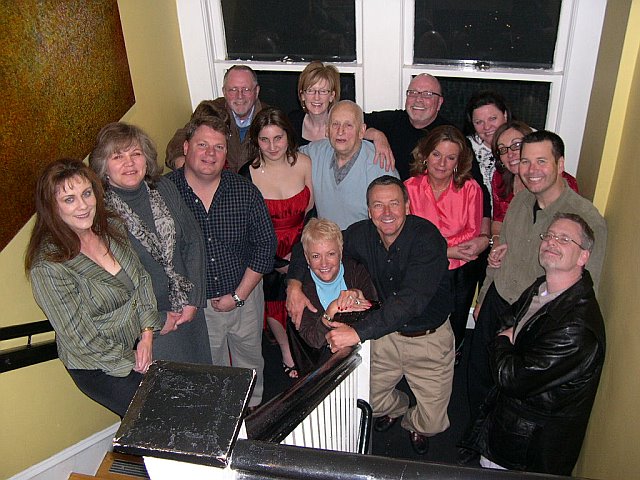 Since a number of folks came in from out of town for the party, the fun extended into the weekend with a day at the spa for the goils, while da boyz went to Hooters and Andretti Kart Racing. Everyone reconvened at the Rectors that evening (Saturday) for a group prep dinner and high-decibel music and conversation.

Beef Bourguignon, sting beans, and gruyere cheese with a few potatoes mixed in was on the bill of fare,accompanied by bottles and bottles of Silver Oak cabernet. After a red velvet birthday cake (I was literally terrified that the 50 candles would set off our fire alarm system,the HEAT was intense!), David Crane became the “Cosmo Boy” and mixed Cosmopolitans all night for the girls, while the boys stood back, sipped our fuel of choice, and watched it all happen. (I had heard rumors of the “legend of the Deb Girls” drinking prowess, but I couldn”t have imagined on my own,).

Once again, a great time was had by all.

The weekend wound down the next day with brunch at a local spot, and then trips to the airport to deposit the travelers. The GA Rectors were all left with a warm and fuzzy feeling of a weekend Kelly (and the rest of us) will long remember!

If you are interested, you can link to the online photo album.

Its too bad you ALL couldn’t have been there,

One thought on “Kelly celebrates half century with ATL bash”