It might not surprise you to know that I had several cheese highlights on our trip. Believe it or not, London is a hub of artisan cheese activity these days; of course you can’t turn around without tripping over cheese in France, even in the South where even the goats sometimes think it’s too hot to make milk; and Spain is a rich but as yet undiscovered cheese territory for me. 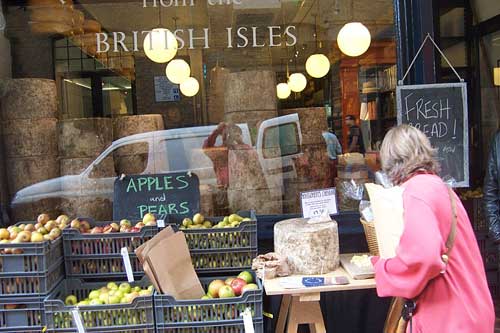 Here Alison helps herself to samples of Montgomery’s Cheddar cheese in front of the original Neals Yard Dairy shop in Covent Garden, London. You can see me taking the picture in the reflection of the window where truckle-upon-truckle of aging Cheddar cheese tantalizingly draws you into the shop. Also stacked in front of the shop are crates of British heirloom apples and pears, which we bought several samples of that day. 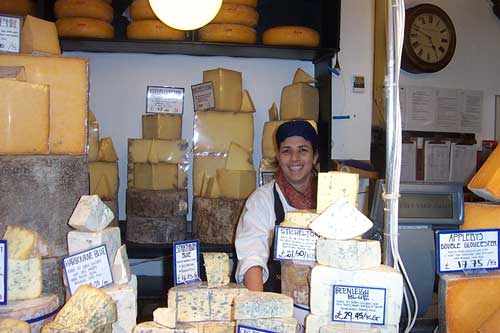 Inside the shop is a literal RIOT of cheese, mostly from the British Isles, and almost all artisanal to the point of naming the farmer’s dog in the description on some of the labels. The sharper eyes will notice that I happen to be in the BLUE cheese section when I took this picture, because I did actually buy some blue cheese just before asking the clerk if I could take her picture. We had just been talking about a fascinating project that she’s been working on for the shop/organisation (note Brit spelling) to replicate a Portugese style of washed rind cheese that is rennetted using thistle flowers instead of calf or microbial rennet. Although it’s very hard for me to visit a cheese shop like this — I want to try/buy everything, which causes my brain to shut-down from overload, which means I often miss things unless I can force myself to focus on JUST a subset of cheese, in this case blue — but I managed to spend 45 minutes chatting about cheese while Alison and David graciously accommodated me by sampling that Montgomery’s cheddar on the outside display several times…

The blue cheese that I bought was a sample of another Neals Yard Dairy project to make a TRADITIONAL raw milk Stilton cheese which the owner, Randolph Hodgson, has been in search of ever since he began selling British cheeses from this small nook in a by-the-way shop yard in Central London many many years ago. True Stilton cheese, according to the Wikipedia entry, may only be produced in the three counties of Derbyshire, Leicestershire, and Nottinghamshire according to the PDO code, which *requires* pasteurized milk. (Stilton is a little town that was on the carriage path that led to London from which this kind of blue cheese was originally shipped to the big city. Stilton cheese cannot actually be made in the town of Stilton.) Now Mr. Hodgson has initiated a project to make a raw milk blue cheese in the Stilton style called “Stichelton”, an example of which is on the left of the cheese board. In the middle is a hunk of Keen’s Cheddar, and on the right is a hunk of the award winning Blue Thistle made by Monroe Cheese Studio. The Stichelton was very good, but I thought my blue cheese stood up nicely next to it.

UPDATE: The NYTimes has now published a story on the Stichelton project, written by Harold McGee. In the article, Mr. Hogdson has a great quote:

“The point is not to try slavishly to reproduce a traditional cheese,” Mr. Hodgson explained. “It’s to use a scientific understanding of tradition to make modern cheeses that taste fantastic.”

These fresh goats cheeses are made in the Languedoc region of France and were being sold at a cheese cart in the “Bio” (French for organic) farmers’ market under the aqueduct of Montpellier on Saturday morning. I saw these and immediately wondered why our Maine (or VT for that matter) chevre makers didn’t have a maple leaf mold for their cheeses…! I will work on this. In the meantime the shop mistress was very interested to hear that I was a cheese maker from the US, and she did her best to describe how some of her cheeses were made, even though she was not a cheesemaker, just the mother of the owner of the cheese shop, and although her mother — who USED to make cheese — was working beside her, they couldn’t quite communicate (in their limited English; my French was even worse) the specifics about age and origin, etc. But I enjoyed our talk. I should have taken her picture.

The day before, the day we arrived in France (taking a SIX am flight out of London-Stanstead Airport, which is 70 miles out of London, requiring hoop-jumping logistics for transport meaning that we had to wake at 2:00am to catch the flight…!) we went shopping for dinner at the markets near my brother’s house. We found a butcher we knew from a previous visit and immediately purchased many different terrines and sausages for lunch and dinner. Following that we found the local baker and bought a few baguettes to go along with the meat treasures, and then in a search for mustard and a few apples to pair with the boudin noir, we stopped at a local produce market that was selling a few (seemingly) local varieties of apples along with the Pink Ladys and Galas that the world seems to have embraced. And while standing in line to pay for three apples, I noticed, an a tiny crate on a shelf near the cashier’s head, some precious and beautiful Rocamadour cheeses. For 0.75 Euro each! A buck a cheese in US dollar speak. I know they’re tiny, but they pack a whollop of flavor — I’ve set one out in front of four people numerous times and I’ve had left-overs each time. And these were “goats cheese” lovers…they have that deep goaty smoke with a rich caramel aged flavor and a whip-snap of acidity that is addictive but can be overwhelming. I couldn’t resist and got one.

I did buy a really black and gooey flat goats cheese from this van which was from a nearby farm, but I didn’t write down the name of it. We ate it with a fluffy/crispy baguette and cheap (but oh-so refreashing) rose wine for lunch this day.

If you know French, then by following this “Tree of Cheese” you will know everything there is to making every different kind of cheese…this diagram leaned against the Fromagerie of Monsieur Puig, a member of some of France’s most prestegious cheese seller’s guilds (he showed me pictures) who offers the best of the best of French cheeses in his immaculate shop, which has always been packed with customer whenever I’ve visited it. 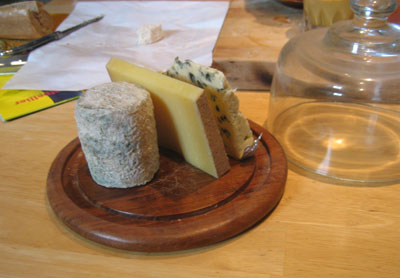 Just inside the door, beyond the Tree of Cheese, was another chalkboard that announced the cheeses that had just come “into season” so that we knew what was new and possibly unique. For our family’s dinner that night, I wanted three cheeses of three different milks, ideally with a Southern attitude, and with help from the seasonal board I chose a Charolais fermier goats milk cheese, a 24 month old Cantal cheese from the Alps, and a Basque Blue sheeps milk cheese from the Pyrenees. What a treat to have that kind of choice (M. Puig easily had over 100 different artisanal cheeses from all over France in his case), including a ‘suite” of four different Picodon-type cheeses from a very local organic goat cheese maker that were each flavored with a different fresh herb on the surface. Because I knew I had already bought too much cheese for five people to eat in one sitting, I tried to buy one of them that had a beautiful little fern stuck to it, but in French that Alison had to translate for me, the clerk said that I had to buy all four or none at all. Reluctantly I said no to the quartet and I’ve regretted it ever since.

Thank goodness that my family are all Foodies, because they bring the right books. One of these books told us to “not miss” the central city market in Bibao’s old city. So even before arriving we decided that we would “not miss” the market that first morning we woke up in this strange city which is emerging from its industrial past (the “Pittsburgh” of Spain is how some guidebooks have termed it), into a very art-and-design forward city in a region that is better known for car bombs. The market building in the old city (easily accessed via tram) is 19th century classical on the outside, with three levels. We walked down from the sidewalk into the first level which featured seafood and only seafood, all fresh and glistening on pillowing white shaved ice. Fresh fish and crustaceans (squid and octopus of all types and sizes, clams of all kinds, even gargantuan barnacles) predominated, but the traditional salted forms (bacalao and preserved anchovies — spelled “Anxios”) were easily available.

Upstairs from fish was everything else: fresh and preserved (Jamon!) meats, cheese, bread, and a few fruits and veg. Above is an example of the Basque cheese on display. And in the lower right corner of the photo you can see an example of a Gallician cheese called “Tetilla” meaning ‘little woman’s breast’ because of it’s shape, which must be a result of how the curd is drained — probably in a sewn cloth bag with the corner at the bottom. I bought half of one in Bilbao (about a pound and a half) and we ate it along many different jamons and other sliced pork products for a light dinner. Th cow’s milk cheese was high moisture, with a brined rind, but with surprisingly low salt — probably aged less than 60 days. But all of this highlighted the smooth and creamy texture giving an effect between a mozzarella and a young provolone. I suppose, given the shape and the name, the cheese had to be a “celebration of milk” but in our example it was scrumptions — not a bit was left.

Three kinds of Manchego cheese stacked on a counter in the Bibao public market. Notice the advertisement for organic Spanish cheese in the background! The cheeses of Spain are almost all from Northern Spain where the mountains create a cooler climate, and the Basque cheeses were all made from sheep’s milk.