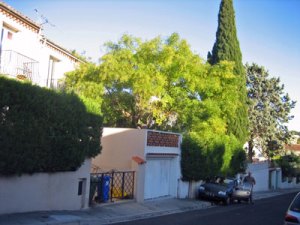 the garage with the house behind… the gate is behind Eric 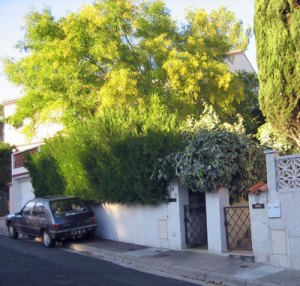 Friday 19 October
Our mission: Collect Eric and Alison at the airport at 9:00am. I slept well in Brian’s fine guest bed and woke up at 7:15. No coffee — no nothin” — in the house, so we left for the airport a little before 8:00 to coffee up there. Brian left detailed instructions on getting to the airport, but they bore no reference to the city map, so if we got lost,
Never mind, just go for it. 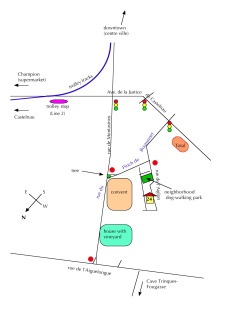 Sorry, I forgot to tell you how to get to the airport. To get there, follow the map I gave you toward Castelnau (on the left of the map). Stay on Ave. de la Justice de Castelnau, with the tram tracks always on your left until you get to a curve that veers right and a tunnel. Stay left and go through the tunnel, then stay on that road, going under a narrow RR bridge and past a nursery (on both sides of the road). At the small rotary, bear right and stay on that road for a few km, going past Super U on your left, the Maison Blanche hotel, then a few lights, then there’s a bowling alley on the left and finally Chicken Charley’s on the right. After Chicken Charley’s there are a bunch of traffic lights and an overpass. Stay to the left going under the overpass and turn immediately left to get onto the limited access road to the airport (and the beaches). Merge onto that road and keep in mind that the speed limit is 70 km/h and that road is a well-known speed trap. Don’t get flashed or I’ll send you the bill. A little bit after you pass the exit for the autoroute (A9 toward Barcelona or Lyon), the speed limit rises to 90. After that, you’ll pass the expo center and there will be signs for the airport (with a little airplane in a square). It used to be called Fréjorgues but now it’s called Méditerrannée and the signs might say either one. When you get off the main road there will be a rotary under the highway and the signs will lead you to the airport. Once there, the most convenient parking is the last entrance on the left (I think it’s P2) before you get funneled onto the road for cabs and brief drop-offs. Remember that when you leave, you pay for parking at a kiosk, either inside the airport or at the pedestrian entrance to the parking lot, not at the exit.

To get back to the house, get back on the same highway, following the signs for Montpellier. You’ll go a ways on that road until you go thru an underpass where the speed limit drops to 70 again. There are maritime pines in the median and you will get off at the first exit after there are no more trees in the median. There will be a sign for Castelnau and La Pompignane (the name of the road with Chicken Charley’s and everything else). After the exit, there is a big mess of an intersection. You want to go down to the bottom of it and stay to the right, so you can turn right on La Pompignane. Head back up the way you came out, passing the bowling alley, the Maison Blanche, the Super U, and then at the small rotary go around to the left (about 10 o’clock), past the nursery and narrow RR bridge, bearing left with the traffic, going back through the short tunnel and up along the tram tracks to Ave. de la Justice de Castelnau and you’ll be back on the map again.

Not to worry, getting there was EZ with the excellent directions (never did see Chicken Charlie’s). By 8:30 we sat in the coffee shop overlooking the arrival area with coffee and a pane raisin. Good!

We were soon back to the house with a full car. We made a quick turnaround and then on to Champion (the local supermarket) for some food and stuff. It was a lovely October day, cool in the morning, red red sunrise and cool and sunny in the day. Perfectomente. Eric and Alison then hit the local markets for good meat, bread and cheese.

We went to Cave Trinques Fougasse — again with Brian directions — to meet for lunch with Brian’s potes. Lunch was excellent and relaxing at this unique restaurant/wine bar/wine shop, though we never did connect with Brian’s colleagues from the lab. Turns out we were supposed to call them. Oh well. 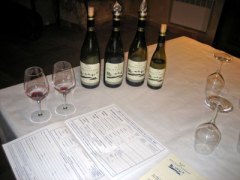 After, Eric and I went to Daumas Gassac for the wine Brian had ordered. It was a lovely drive and we had bad traffic for only about 15 minutes when we returned to Montpellier. Brian had ordered Rouge magnums for each of us and a jeroboam for himself.

Dinner started about 5:30 with saucisson, and a perfect selection of cheeses by Cheese E; cows milk blue, sheeps milk Roquefort and a little coin of Rocamadeur goat cheese, good bread and gin and tonics. We gorged on that, so dinner was limited to Boudon Noir and a salad with more good bread with some fabulous rose from Brian’s refrigerator. 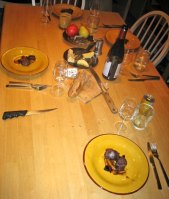 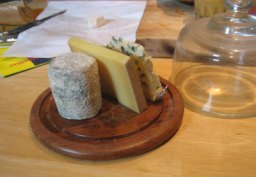 Saturday 20 October
Carol and Alison are going to the Regarde: des Enfant photography show near the old city. Eric is hanging with his computer. I opted to go with C and A. 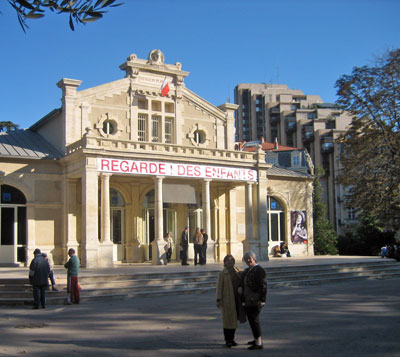 The show — photographs of children — was awesome. Too bad they didn”t edit the material. It was too much by half, but what was there was excellent. How apropos that when we came out, Alison spotted a young girl riding the seat of her father’s bike.

I left the girls to shop and do girl things and trammed back to join Eric at the ranch. Just as I asked, “What’s up?” the phone rang. It was Brian, calling from the train pulling out of the station in Paris. He said he would be in Montpellier in 3 hours, 20 minutes, “Set your clocks by it.” That would make it 8:40 at the station.

I called Hertz and said we would be late picking up the car, no problem. [Not as easy as it might seem. I had no local number for Hertz, so I called the 800 number I had. That’s a toll call from Europe, so I limited my question, “What’s the local number for Hertz in Montpellier?” She gave me both the airport and the train station. Hey, train station would be easy, I called, but they close at 7:30, airport is open until 11.]

We planned and prepped dinner:

We left for the train station — this time to Brian’s phone directions from the train. Carol stayed to light the grill when we call from the airport after getting the car. What a plan!

Two visual gigs were going on as we met Brian at the station, each required minimum set-up, but sure forethought: 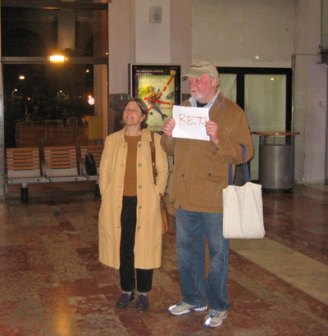 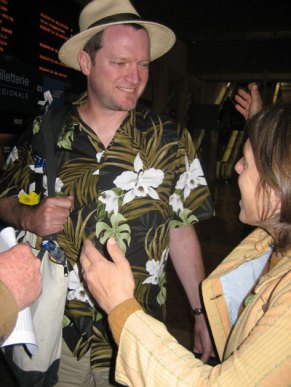 There was more fun at the airport, the place was deserted except for the guy at the Hertz counter. He didn”t have the exact Renault Scenic that we ordered, but offered up two alternatives. He gave us the keys to both to check them out in the parking lot, as deserted as the building.

What fun. A big Renault sedan and an Opal Zafiro minivan sat at our beck and call. We frolicked around opening trunks and sitting in back seats and made the obvious choice of the Zafiro. 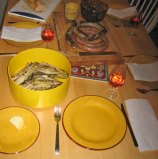 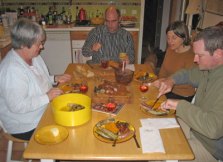 Dinner was good and it was good to be all together on the eve of our adventure. 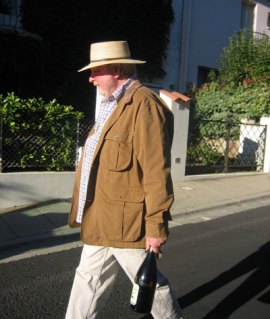 E and A were out early to get croissants while I made coffee with our funnel plus filter contraption. We were all packed and ready to go at 9:30, but Brian was stumbling around finding things, saying goodbye to Sadie and so on. Can”t blame him, got back from two weeks and 12 time zones away, only to leave for another week 12 hours later. No matter, we were in the car with wheels turning at just past 10:30; plenty of time for lunch in Toulouse. 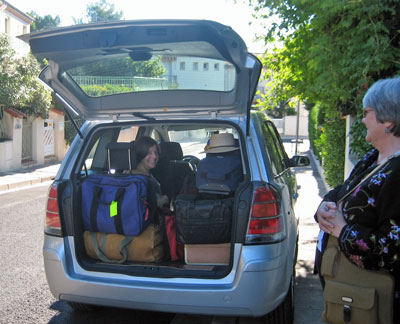