Magic comes in a packet of seeds. Beet seeds are exponentially magical because their ‘seeds” are actually clusters of multiple seeds in a fuzzy nutlet or capsule (see image of magnified seed) which often results in “tufts” of beet seedlings along your careful row, and almost always requires thinning.

Witness, then, our neighbors who created a garden from a rather thin lawn behind the house when the moved in a few years ago. They have diligently worked with the thin soil they inherited, but this is slow work and their thin harvests have sometimes reflected the soil they started with. Beets seemed especially sensitive to the lack of organic matter, and they got in the habit of flooding the row with the crinkly beet seeds in order to manage some greens and a few decent red roots for the season.

However, their soil seemed to turn a corner in 2005, and much to their surprise, their “little” row of beets suddenly yielded a bumper crop of the dark fist-like roots — way more than they are used to consuming. After multiple and repeated baked, boiled, and roasted side dishes, and gallons of borsht, they have lately sought new and creative ways to make a dent in their stache. At a recent dinner, one of us suggested — since they are sweet and solid, much like a pumpkin or squash, wouldn’t they make a good pie? Eyebrows aloft, James agreed that it would be worth a try. 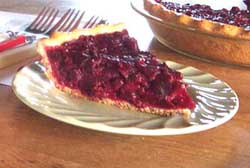 A few weeks later we got a call announcing that the first attempt had occurred and would we like to trial the result? We did, and a day later James arrived with an open-face deep red pie with perfectly scalloped crust edges. Based on a green-tomato version of “mincemeat“, the sweet candied flavor of the beet mixed well with the lemon citrus notes, and the apple’s earthy anchor. The spicing was subtle but complementary, though there was much discussion about the texture provided by the “chopped” beets — some felt there was more to chew than might be expected, even though the beets were thoroughly cooked and tender.

Following is the adapted recipe:

Mix all but the walnuts and egg whites, place in a shallow pan, and bake together at 350 °F for 40 minutes.

While mixture is cooling, make your favorite pie dough and roll out enough to line one 9″ pie pan.

Once mixture is cool, mix in walnuts and egg white, add to pie shell, and bake.

Perhaps more curious than inspired(?), a few weeks later Alison took some left-over cooked beef, tossed it with some sweet things and black rum, and let that “think” for a few days before adding shredded beets and diced apples and baking it up for us all to try, along with actual hard sauce. James added a few bottles of ginger flavored homebrew, which was the PERFECT accompaniment…but before we dug into the pie, we lit the “bomb” our friend David from London had given to us for Christmas, and were all surprised by the sudden artful scattering of curly mylar bits (which, due to our ignorance of bombs, had to be picked out of the food) along with balloon noise makers, which served as a childish diversion for longer than it should have.

But back to the pie…Now this was the mincemeat that I remember from my childhood when Kitty would make a pie to share on Thanksgiving. It was spicy and savory and sweet at the same time, chewy and substantial, an extreme example of a pickled dessert. Alison admitted, however, that her recipe wouldn’t help Liz and James work through their beet pile since she used only one beet per pie. I remembered it being served warm so the hard sauce melted and mixed with the sweet meat bits. Alison remembers Phebe serving the pie cold with a slice of hard sauce on the side like a pat of butter on a bread plate.

a dessert served with hard sauce

1 week ahead, make the mincemeat and store in the frige in an airtight container.

After at least the week (stirring occasionally) mix the mincemeat with the apple and grated cooked beet, put into a pie shell, cover with lattice strips, and bake for an hour.

For the Hard Sauce, cream the butter, slowly add sugar while beating, then add liquids while beating. Serve cool, but not chilled according to Marion Cunningham in the Fanny Farmer Twelfth Edition

3 thoughts on “The Beet Goes On”