I caught up with my leftover paste-up at home this morning. My work desk in the back room is a mess, the dining room table in front is big, but the kitchen table has the best light, so I set up there. And the red stool is just the right height — not standing, not sitting, like I’m back working at the drafting table in one of the animal show barns Ohio State used for architecture students back in the day — for that kind of work. 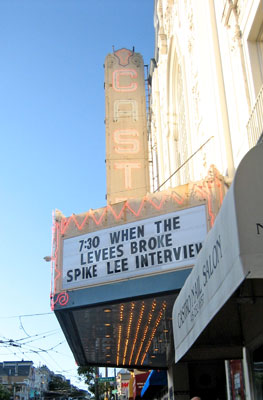 An Evening with Spike Lee
The Program Guide says:

Join us for a special evening honoring the unconventional filmmaking genius of Spike Lee, recipient of this year’s Film Society Directing Award. Retrospective film clips from Lee’s singular career will be followed by an onstage interview conducted by Boston Globe film critic Wesley Morris and a screening of Acts II and III of Lee’s four-act Hurricane Katrina documentary When the Levees Broke.

The Directing Award was first won by Akira Kurosawa in 1986, and then presented to such icons as Clint Eastwood, Warren Beatty, Robert Altman, Milos Forman, in this century, Werner Herzog winning it last year. Pretty good company.

Since I actually bought a ticket for this event, I didn”t have to put up with the red carpet falderal and grab a spare seat in the balcony. When I arrived a little after 6:30 for the 7:30 event, I found the end of a line that snaked up Castro Street and around the corner well onto Market Street. The good news is that it moved quickly, and in the theater I went straight to the front and found a seat on the right side, in the sixth row. Excellent.

Two rather uncomfortable looking overstuffed chairs were on stage, empty, but well lighted when I sat down a little before seven. During the wait I pulled out a New Yorker to read, but the print was too small in the dim light of the house, so I pulled out my book. Better, but still very difficult to read. Three teen-age Asian girls in front of me were playing with their cell phones and the bright screens of their phones gave me an idea; I could use my cell phone as a light source! It worked. Held just the right way, it would illuminate two or three lines of text. I settled in.

I”ve always admired Spike Lee. I”ve planned to see nearly all of his 19 films, but have only actually seen five. Wesley Morris is a respected film critic for the Boston Globe (formerly of the San Francisco Examiner), but both he and Spike Lee seemed uncomfortable during the interview. Things brightened up when questions were invited from the audience.

What are you working on now?

“I”m working on two projects, one a is a sci fi story, the other on James Brown” (or was that Jim Brown? Jim Brown presented the Directing Award to Spike at Awards Night).

You”ve done many films with Denzel Washington, how does that compare with the number done by Martin Scorsese and Robert DiNero?

“I”ve done four with Denzel. Maybe I need another to catch them.”
With that, Spike started counting off Scorsese/DiNero films on his fingers, helped by the audience, he got to seven.
“Well, I guess we better get to work,” he said.

The NAACP has banned the use of the N word and the B word and the HO word (true?), how do you feel about that?

“Good question,” (long pause and rubbing of his chin) “I didn”t know that. I”m very much against the hip hop rappers urging black youth to disrespect women and their peers and others, talk about killing, rape, I especially don”t like 50 Cents (he almost spit the words, emphasizing the ‘s”) and the way he says, ‘I”m gonna get mine now'” ,he quoted a few offending lyrics.

I don”t have HBO, can you get When the Levees Broke shown on regular TV?

“That documentary can never be shown on regular TV. Sometimes when angry, frustrated people speak out, they use strong language, too strong for broadcast TV. That and the dead bodies, unattended on the freeways and floating in the water, and the length and the situation,” He stopped short of saying that no sponsor could stomach the entirely justified political criticism.

When the Levees Broke was produced by HBO and depicts the horror and squalor of New Orleans in the time just after Katrina and the breaking of the levees. Much of the parts we saw focused on the mismanagement of the situation by the State government, FEMA and the President and Vice President who seemed above it all and didn”t want to be bothered. He also pointed out the heroism and dispatch with which the National Guard responded when they were finally called, citing specifically a General and a Captain who just got things done. The story was told entirely by those interviewed, some with resignation, many with anger and frustration. There was no narrator, only pictures, music and people speaking out.

Short of seeing the film yourself, I urge you to read the interview with Spike Lee about the making of the film, on the HBO website.