In Central Africa — I learned this when I traveled to Uganda for the NIH — the Bantu people have a saying when a person passes away. They don’t say “he died,” or “he is dead.” They say “he stopped.” — Cos Berard 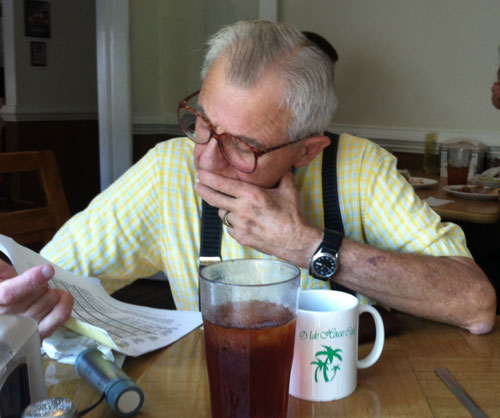 If he had been born in his father’s home town of Monteferrante — a little mountain village high above the Adriatic coast of Italy — his birth certificate would have read “Costantino Berardinelli” just like his dad. Instead, “Costan Berard” was born in Cranston, NJ, just outside of Newark, the last of four children. His mother, Frances Coma (changed to “Comer” when her family arrived in the US), was widowed when Cos was only three years old, and after that she was busy running the family lumberyard business and Cos was raised by his sister Claire. The family knew him as J.R. (and the “Uncle June” similarities don’t stop there…) 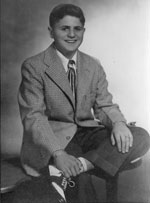 Cos’s intellect was a 250 watt bulb in his small house: it was apparent immediately and could not be hidden. He earned a scholarship to a local prep school (Pingry), and then went on to Princeton where he graduated first in his class. He applied to Harvard Law School and Harvard Medical School and told his roommate that he would attend which ever school accepted him first. He was accepted to both, but later admitted to a son-in-law that he felt he could “do more good” as a doctor than a lawyer.

Cos specialized in Pathology at Harvard Medical School and graduated in 1958. He completed his residency at the University of Rochester before being snapped up by the National Institute of Health and moving his family (new wife Susan; Alison, born in Rochester) to Bethesda, MD. Leslie was born soon after. 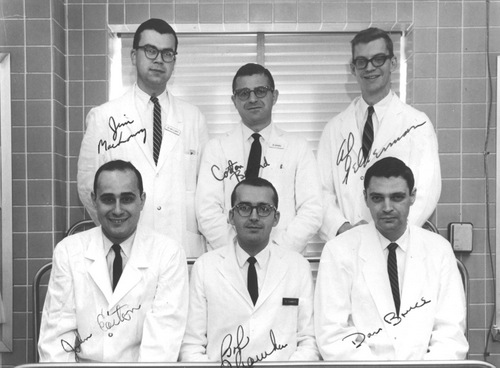 Cos threw himself into the newly energized public effort that would eventually be called the “War On Cancer” with an intensity that is rarely attributed to public servants, though is actually a common thread between most of them. He spent hours of every day in his basement, after work and on weekends, reviewing slides and writing papers. He became a well-known and respected world expert in hematopathology (diagnosing and treating cancer of the blood, like leukemia and lymphoma) traveling and teaching all over the world. 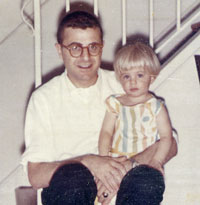 When Cos needed a break, he might drive to see his mechanic, Joe Cupp, and watch him work on whatever car was up on the lift. Or he would take his young girls out to the end of the Washington National Airport runway where they could listen to pilots and control tower chatter on a radio and watch these gigantic modern miracles of flight descend from the skies or lift up into them.

Cos crossed the 20 year mark in his public career just as President Reagan declared that “government is not the solution to our problem, government IS the problem.” Cos took the hint about the future direction of the NIH budget and found an eager new employer in the St. Jude Children’s Research Hospital in Memphis, TN, just as his daughters headed off to college. His mandate was to turn St. Jude’s department of pathology into a world leader in the fight against children’s cancer, sparing no expense because Danny and Marlo Thomas would raise as much money as it took to do that. Cos was never known for his extravagance, but he still managed to fulfill his charge.

As his department began flourish, Cos developed an interest in golf, especially out at the Naval base in Millington where “the sound of freedom” could be heard every time an F-18 Hornet jet took off from the runway beside the golf course. Cos also co-founded the international Society for Hematopathology while he was in Memphis, something that energized him for the remainder of his professional career.

That career ended, as Cos had meticulously and purposefully planned, when he retired with his wife Susan to Fripp Island, SC in 1998. He enjoyed golf on the local courses, as well as on courses up and down the East Coast which he drove to visit with Susan doing cross-stitch projects in the navigator’s seat of their Honda Odyssey. A few years into his retirement he was diagnosed with throat cancer, which required the removal of his larynx, and he memorably spoke with an electro-larynx after that, using its deadpan monotone to great effect when telling jokes, especially to his favorite waitresses at the Beaufort Golden Corral during his daily visits there.

Susan passed away in 2009 and Cos grieved for a long time while he clung to his routine on Fripp Island and in Beaufort as a comfort. He did not like to travel after her death, so his circle narrowed considerably. Cos’s extraordinary mind was able to grapple with and resolve medical mysteries that had confounded men since we first recognized illness and death as something that was wrong, something we wanted to fix like Joe Cupp could fix cars. However his mind was unable to always grapple with our social niceties and many of the communal expectations of his family and friends. It’s not a secret that he was a difficult man to relate to, but he was, at his core, a good man who loved his wife most of all, loved his family, and to whom his co-workers were devoted. He had a difficult childhood, but he made himself useful to society in the only way that seemed logical to him: helping to fix those of us who were ill. That made sense, it was logical, and he could do that. He did that, and for that he deserves our thanks.

[Comments are most welcome, but you must register (create a user name and password) to enter one. Or send an email to Alison or Eric and they can post your comment. New member comments are delayed until they can be processed by a spam filter.]

11 thoughts on “He Stopped”